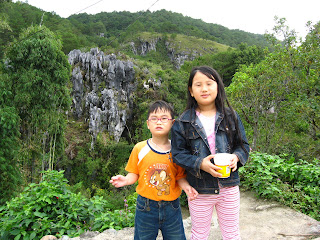 We encountered interesting local practices in our visit to Sagada in Dec 08, and after further readings, the hanging coffins have an interesting tale to tell.

Ferocious tribal wars were once a common threat in the Cordilleras in the Philippines some two centuries ago, and it was no exception in Sagada.

The entire hilly communities were caught in these routine upheavals and nothing was spared including burial sites. According to the villagers, coffins were often a favorite prey of the headhunters, mainly from Bontoc, who sought the prized skulls, living or not. 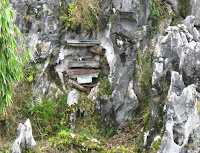 Fearful of the diving backlash from their headless ancestors, quick thinking tribal leaders in Sagada resolved to hang their coffins up on the slopes of the many karst hills found here. They also placed much hope on the physical attributes of the landscapes to deter the enthusiasm of the conquering troops.

According to ancient funeral rites, the deceased must be seated in an upright position while villagers worked frantically to erect bamboo scaffolding to the elevated burial ground.

The task to hang the coffin on the sharp slope of hills rested on the shoulders of pall bearers. 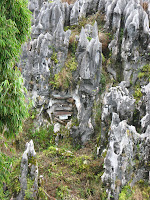 Theirs is not an effortless one. Besides the risk of fatal fall and they must also deal with the rotting fluids from the leaking coffin.

Nevertheless, a pall bearer’s job was traditionally held in high esteem. Interestingly, it was considered a good omen for the pall bearers to be showered in the fluids while they carried out their task.

However, with the introduction of Christianity by American missionaries into the region compromises have been made to mix the native rituals with their new faiths. 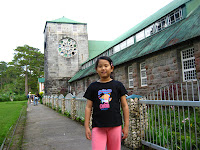 Nevertheless it has become a novelty nowadays to have hanging burial and only villagers who have two surviving generations of descendants are allowed a burial on the hill side.

According to the villagers, the last hanging coffin burial in Sagada was held in June 2008.
Posted by Zureuel at Monday, January 19, 2009 No comments: Links to this post

Iron Dragons of Malaya - A Tribute to Sentul 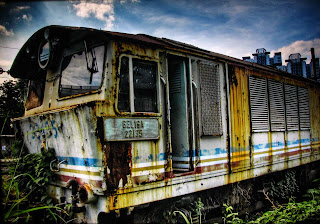 Train spotters in Malaysia should not miss the opportunity to experience the multimedia art exhibition titled - Iron Dragons of Malaya, and at the same time enjoy a nostalgic trip to the country’s largest railway shed – the KTMB Sentul Workshop.

A collection of photographs of the British built shed and rolling stocks or whatever left of the depleting building were taken using state-of-the-art photography technique known as High Dynamic Range. 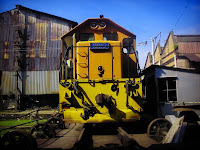 The photographs, according to Khairul Azril Ismail, the architect of the exhibition, will reward visitors with captivating 3-D like images. Visitors will also be entertained by the multimedia presentation which took Azril and his team a year to produce and it is a befitting tribute to the train workshop.

Personally I think it is akin to an earnest obituary to the shed for a century of faithful services rendered.

Sentul first took its form in1905 but now is living its last remaining days. By the year end, the entire KTM overhaul job will be concentrated at Batu Gajah.

The Iron Dragons of Malaya – is currently run at KLPac till Jan 25, 09, and admission is free. (The enclosed photographs are reproduced from Azril's collection)
Posted by Zureuel at Thursday, January 15, 2009 No comments: Links to this post 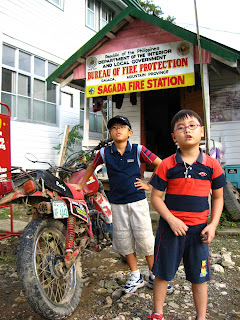 Perch high in the mountainous regions of the Philippines Cordilleras is the Sagada Fire Station, and reputedly the World’s Smallest Fire Station.

Locals will proudly tell you that despite its unfavorable size, the cabin like station operated by the Bureau of Fire Protection is their only viable insurance to safeguard the idyllic hamlet from fire hazards. 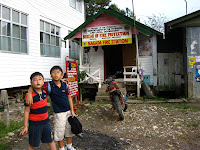 A tall order nonetheless for a tiny fire station and the entire fire fleet of a red Honda scrambler, which has seen better days. Fire fighting paraphernalia appears almost non-existence too except a radio transmitter inside.

Hence, the questions mark if the world’s smallest fire station could live up to its roles in times of an emergency.

Sagada is remarkable as a pristine highland retreat and as we have discovered in December 2008, has great potentials for a respite holiday destination with a magnificent mix of caving adventure and picturesque rice terraces add to it.

Nevertheless, a quick check in the internet revealed a chequered past that is anything but peaceful.

Like many first time visitors, we were surprised to learn that curfew hours are enforced from dusk to dawn in this tranquil place. When asked the town folks the only answer we got is that the curfews are for our safety without revealing too much.

We soon learnt that the entire Cordilleras were engulfed in a violent armed struggle and it was only in the 80s that the locally supported - The New Peoples’ Army (NPA) - signed a peace accord with the Manila Government to bring peace to the area.

Perhaps for this historical reason, I assume the non-descriptive Sagada Fire Station with all its imperfections is a welcoming sight and perfect to assure the war weary people of Sagada who long for some real peace and tranquillity.
Posted by Zureuel at Wednesday, January 14, 2009 No comments: Links to this post 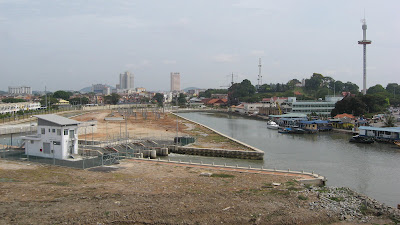 The lavish RM190 million (app. US$65 million) Beautification Project aimed to inject a new lease of life for the Malacca River is finally at its tail-end.

The project paid in parts from the coffers of the Tourism Ministry was first embarked in 2002.

High on the project initiatives are to rehabilitate the heavily polluted waterway and to stem the deplorable local practice of turning it into a sewage dumpsite.

Much faith was placed on the project to bring about a quality change in the water and the life of the people dependable on the river. The project was even touted by the state as part of a grandeur scheme to elevate the historically-rich Sungai Melaka into the “Venice of the East”. (For additional write up on Malacca River, pls refer to article titled "Malacca River Folly Project" - Apr 20, 08) 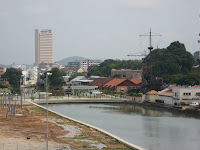 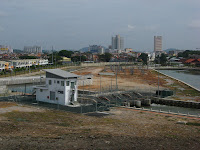 However, the project fell disappointingly short of the promises made and worst, altered completely the characteristic and the function of the river. 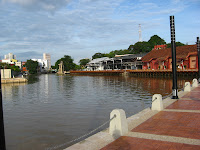 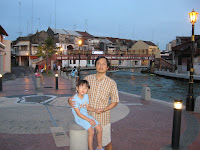 The entrance to the river is now permanently blocked near the Maritime Museum and as a result, no free flow of river traffic is allowed up the river. The water level is also artificially controlled by newly built pump-house so to enable excursions by tourist boats operated by the state river board.
For over five centuries, schooners and traders plied the Malacca River in search of the valuable spices and helped turned the city state into one of the World’s greatest entrepots.

Sadly, if you choose to stand from its banks today, you would have no clue to its colorful past.

Gone are the sights of Sumatran sails unloading its charred cargoes to the nearby rustic godowns or the fishing trawlers returning with fresh loads of sea-harvest.

A quick check in Dec. 08, revealed last minute renovation work being carried out on the remaining godowns on the river’s southern banks and plans are to turn them into fusion eatery and commercial outlets you find so sickening similar to Singapore’s Clarke Quay.

Nothing is preserved there to showcase the fabulous richness of the river history.
Posted by Zureuel at Friday, January 02, 2009 No comments: Links to this post 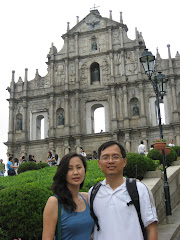